The Ladder of Inference

How to Avoid Jumping to Conclusions

Don't just "dive in" and make a decision right away.

Have you ever been accused of "putting 2 and 2 together and making 5," meaning that the other person thinks you have jumped to the wrong conclusion?

In today's fast-moving world, we are always under pressure to act now, rather than spend time reasoning things through and thinking about the true facts.

Not only can this lead us to a wrong conclusion, but it can also cause conflict with other people, who may have drawn quite different conclusions on the same matter.

In a fast business environment, you need to make sure that your actions and decisions are founded on reality. Likewise, when you accept or challenge other people's conclusions, you need to be confident that their reasoning, and yours, is firmly based on the true facts. The "Ladder of Inference" helps you to achieve this.

Sometimes known as the "Process of Abstraction," this tool helps you to understand the thinking steps that can lead you to jump to wrong conclusions, and get you back to hard reality and facts.

In this article, we'll explain the tool in more detail, and show you how to use it, with an example.

Understanding the Ladder of Inference

The model was first put forward by organizational psychologist Chris Argyris and used by Peter Senge in "The Fifth Discipline: The Art and Practice of the Learning Organization." [1][2]

The Ladder of Inference describes the thinking process that we go through, usually without realizing it, to get from a fact to a decision or action. The thinking stages can be seen as rungs on a ladder and are shown in figure 1.

Figure 1: The Ladder of Inference 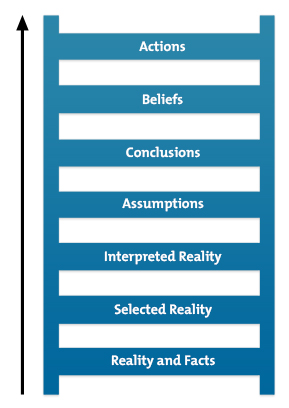 Starting at the bottom of the ladder, we have reality and facts. From there, we:

This can create a vicious circle. Our beliefs have a big effect on how we select from reality, and can lead us to ignore the true facts altogether. Soon we are literally jumping to conclusions – by missing facts and skipping steps in the reasoning process.

By using the Ladder of Inference, you can learn to get back to the facts and use your beliefs and experiences to positive effect, rather than allowing them to narrow your field of judgment. Following this step-by-step reasoning can lead you to better results, based on reality, so avoiding unnecessary mistakes and conflict.

How to Use the Ladder of Inference

The step-by-step reasoning process helps you to remain objective and, when working or challenging others, reach a shared conclusion without conflict.

Use the Ladder of Inference at any stage of your thinking process. The model may prove a useful aid to help you consider whether you're making the "right" conclusion, why you're making certain assumptions, and if you've considered all the facts.

Use the following steps to challenge your thinking using the Ladder of Inference:

1. Identify where on the ladder you are. Are you:

2. Analyze your reasoning. From your current "rung," work back down the ladder. This will help you trace the facts and reality that you are actually working with.

The following questions help you to work backward (coming down the ladder, starting at the top):

When you are working through your reasoning, look out for rungs that you tend to jump. Do you tend to make assumptions too easily? Do you tend to select only part of the data? Note your tendencies so that you can learn to do that stage of reasoning with extra care in the future.

You may be jumping certain rungs of the ladder and forming beliefs illogically or too soon because of cognitive bias, something we are all susceptible to when making decisions. See our article to learn how to avoid it.

3. Work up the ladder again. With a new sense of reasoning (and perhaps a wider field of data and more considered assumptions), you can now work forward again – step-by-step – up the rungs of the ladder.

As you do this, try explaining your reasoning to a colleague or friend. This will help you check that your argument is sound.

If you are challenging someone else's conclusions, it is especially important to be able to explain your reasoning so that you can explain it to that person in a way that helps you to reach a shared conclusion and avoid conflict.

You can learn another 55 decision-making skills, like this, by joining the Mind Tools Club. The regional sales manager, Alice, has just read the latest sales figures. Sales in Don's territory are down – again. He needs to be fired!

Most people would agree that the sales manager jumped to a rash conclusion here. So let's take a look at her thought process using the Ladder of Inference:

Since Don is new to sales, Alice believes that he can't possibly be as good as the "old-timers" who she has trained for years. So, when she reads the latest sales figures (reality), she immediately focuses on the data from Don's territory (selected reality). Sales are down on the previous months again (interpreted reality), and Alice assumes that the drop is entirely to do with Don's performance (assumption). She decides that Don hasn't been performing well (conclusion), so forms the opinion that he isn't up to the job (belief). She feels that firing Don is her best option (action).

To get back to facts and reality, we must challenge Alice's selection of data and her assumptions about Don's likely performance.

Although the figures are down in Don's territory, they have actually dipped less than in other areas. Don is actually a great salesman, but he and his colleagues have in fact been let down by new products being delayed, and by old products running out of stock.

Once the Sales Manager changes her assumptions, she will see the need to focus on solving the production issues – the real problem at hand.

Click on the image below to see The Ladder of Inference represented in an infographic: 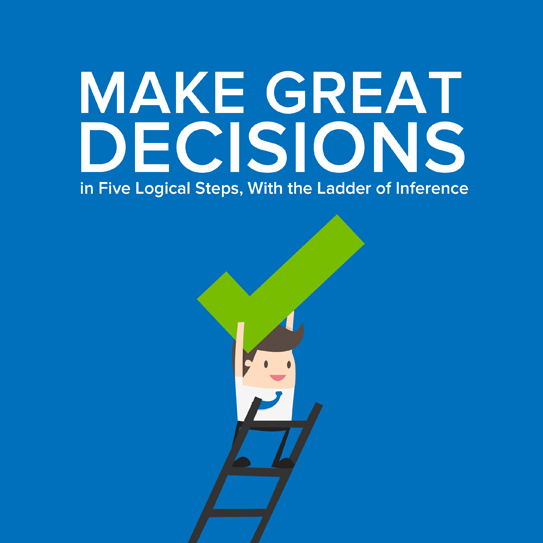 How to Spot Real and Fake News