Learning How to Defuse Tense Situations

What can you do to tame your angry team members?

Anger is an acid that can do more harm to the vessel in which it is stored than to anything on which it is poured. – Mark Twain, American writer.

How many times have you had to deal with an angry person?

Perhaps a customer was unhappy with a poor delivery, a colleague was annoyed because you were given a project they wanted, or a supplier was upset because of a late payment?

It's easy to get flustered or upset when you're confronted with an angry person – and, if you don't know how to respond, you can easily make the situation worse. However, when you respond calmly and with empathy, you can stay in control, and you can defuse the situation in a professional, courteous way.

In this article, we'll look at several strategies that you can use to deal with angry people.

Why "How to Deal With Angry People" Matters

It's important to know how to deal with angry people for a number of reasons.

Firstly, you can calm them down, so that they don't take any action that harms you or others – either physically or emotionally. In doing this, you can break the emotional "spirals of escalation" that can cause so much harm, and you can move toward solving the underlying problems that have caused the anger.

Secondly, if you respond angrily to someone else's anger, you can easily end up being seen as the aggressor yourself. This is disastrous in a customer-facing role.

Thirdly, by responding well to angry people, you can build positive relationships with them, and experience less stress and unhappiness as a result of dealing with them.

Finally, when you respond calmly to angry episodes, you set a good example for others. Your behavior can inspire the people around you, which can transform a team's ability to deal with anger.

However, people can sometimes suppress the visible signs of anger but seethe with fury under the surface. In these cases, anger can be expressed in quite subtle, "passive aggressive" ways.

Passive-aggressive anger is common in the workplace, and signs of it include the following:

Be alert to passive-aggressive behavior, and use these same strategies listed below to help deal with it.

Strategies for Dealing With Angry People

It's useful to know how to calm angry people down. When you can defuse someone's anger, it can enhance your professional reputation and help people who struggle to manage their emotions. Employ the strategies below.

Stay Safe, and Involve Others

If you feel threatened by an angry person, trust your judgment. Leave the room immediately if you feel unsafe, or if you're too upset to resolve the situation on your own.

Ask your boss or a trusted colleague to work with you to resolve the situation. It might also be appropriate to report the incident, especially if the person is completely out of control and you feel there is a risk of violence.

It's very natural to get upset when angry people confront you, regardless of whether their anger is justified. You feel under attack, and your body floods with "fight or flight" hormones, which can lead you to become angry yourself.

Do your best to respond calmly and intelligently when you face angry people. Learn how to manage your emotions, and practice deep-breathing, so that you stay relaxed during tense interactions. If you feel yourself getting upset, politely take a break from the conversation and go for a walk to calm down.

Perhaps a team member received some bad news, and are taking their negative feelings out on you; perhaps they feel overwhelmed by their workload or personal life; or, perhaps, this person is subconsciously using anger to make themselves feel better. If you can recognize this, you can distance yourself from the anger emotionally, and you'll find it much easier to cope with.

(At times, however, you may be the cause of another person's anger. Here, it's important to take responsibility for your actions: don't distance yourself.)

Next, you need to determine why the person you're dealing with feels angry.

Use effective questioning techniques or the 5 Whys method to get to the root cause of their anger. Encourage them to explain why they feel angry, don't interrupt them while they speak, and keep on asking questions until they have fully explained themselves.

Try to see things from their perspective as they express their feelings. Use active listening, so that you really listen to what they say.

When it's your turn to talk, speak slowly and calmly, lower your vocal tone, and use non-threatening body language. This will often encourage others to calm down.

Try not to use generic statements, such as, "I understand how you feel," or, "That sounds really frustrating." Instead, use specific, clear statements that rephrase what the other person has said (don't overdo this, or do it in a thoughtless, formulaic way). It's also important to communicate with empathy.

For example, if your colleague says, "I needed that report last week and you've been ignoring me," you could say, "So, you feel that I neglected you when you needed information from me, is that right?"

Demonstrate an interest in resolving the situation, and try not to judge the other person's behavior – this shows respect. Think about the last time you felt angry, and remember how you wanted to be treated in that situation.

Pursue a Solution, and, Ideally, Apologize

Once you have understood the situation, try to avoid making excuses or defending your actions (or those of your team or organization). Defensiveness can make others feel even angrier than they are already.

Instead, ask what you can do to resolve the situation and make things right.

If you or your organization are at fault, think carefully about whether an apology would expose you to a significant risk of liability litigation. If it wouldn't (and people sometimes over-emphasize this risk), then apologize appropriately.

In many cases, this will calm the situation down and give you the opportunity to rebuild the relationship with the other person. (It will be much harder to rebuild a relationship if you don't apologize.)

One way to defuse a person's anger is to focus their attention on something else. One 1998 study found that rumination increased feelings of anger, while distraction can decrease them.

You can do this with laughter, if it's appropriate – it's impossible to laugh and be angry at the same time. A funny joke, an online video, or an amusing blog post can take someone's mind off their anger.

People who experience intense levels of anger might be unwilling or unable to change the subject, however, and you may annoy them further if you try to get them to focus on something else. This strategy will likely work best with people who are only moderately cross.

Help Them Control Their Anger

Angry outbursts from someone on your team can affect the whole group's productivity and morale.

Become a coach or mentor for these people, and encourage them to learn how to control their anger. Our articles "Coaching to Develop Self-Awareness" and "Helping Your People Develop Emotional Intelligence" can be useful here.

You can learn another 276 team management skills, like this, by joining the Mind Tools Club.

If you work in an emotionally demanding role, chances are that you have to deal with angry people regularly. This "emotional labor" can be particularly draining, especially when people are not equipped to handle these situations.

Use role-playing, so that team members can practice dealing with angry and upset customers. They'll also benefit from developing emotional intelligence, good communication skills, and assertiveness.

Our articles on "Dealing With Unhappy Customers" and "Delivering Bad News" offer further guidance on how you and your team members can learn to cope with anger in specific situations.

Communicate How You Feel

You may work or live with a person who frequently experiences angry outbursts. If so, once the anger has passed, it's important to communicate how this person's anger makes you feel.

Try to avoid accusatory "you" statements, which can make the other person feel angry and defensive. For example, if you say, "You upset the rest of the team when you yell and scream during meetings" to someone, they are likely to feel angry.

Instead, be respectful but assertive with the other person, and use "I" statements to communicate how you feel. For example, you might try "I feel upset and frazzled when you yell and scream during meetings, and it makes it hard for the team to come up with good solutions."

Anger is a universal emotion, and, no matter what you do, it's important to know how to deal with angry people calmly and assertively.

Start by finding the root cause of their anger by asking open-ended questions. If this seems too daunting, you could introduce your team member to resources that will empower them to become more self-aware, such as Williams' 12 Strategies for Controlling Aggression.

If you or your organization are at fault, apologize appropriately (but be careful of liability issues), and work on finding a solution. Ask them what you can do to resolve the situation.

Try not to get angry yourself. Stay calm, speak slowly, and use non-threatening body language. A calm, rational response can go a long way toward calming angry people down.

Click on the thumbnail image below to see Dealing With Angry People represented in an infographic: 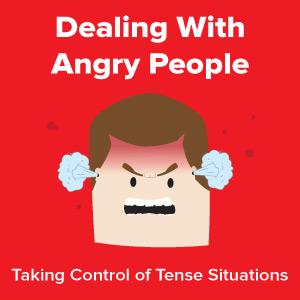